Recomended Beaches.
There is a beach at Skala Prinou and more beaches at Skala Rahoni and Pachis Beach.

Beaches at Prinos within 10min. drive Skala Prinos and Dasilio

The closesest beach at the houses is at Skala Prinos

Beaches at the west of Thassos within 20-30 min. drive

Famous beaches around the island

Thassos is and was well known for its Olive and Honey. You can find by us traditional oil and olives as well as local organic products.

-The virgin olive oil of Thassos is famous for its fine organic capabilities biological, qualities and its unique taste. The tradition of olive oil started before 3000 years ago and Thassian olive oil has been exported all over Mediterranean.
Today next to conventional olive cultivation there is also the organic.

-Greek Thassos olives can only be found growing on the Island of Thassos. Picked when fully ripened, they are cured with sea salt. Washed in fresh water, sun dried, dusted with wild herbs and finally coated with extra virgin olive oil, they maintain a luscious and exquisite flavor.

-From the famous Thassian forests, a honey rich is trace elements and vitamins. The tradition of apiculture in Thassos starts long time ago. Thassians have always been exporting honey.
Today in Thassos many thousand of kilos of honey are produced, which comes from many varieties of trees (pines, fir etc) or from flowers (thyme etc).

-It is a traditional product of the island.  The best honey in Thassos comes from pine trees. Of exceptional quality is the honey which comes from flowers and thyme, thyme and herbs.

The Herbs, such as Thyme, Chamomile, Rosemary, Sage and other local herbs grows at the mountain of Thassos are used since ages from the local people as tea or in liqueurs or in oil for healing purposes. 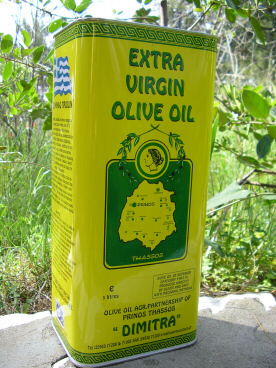 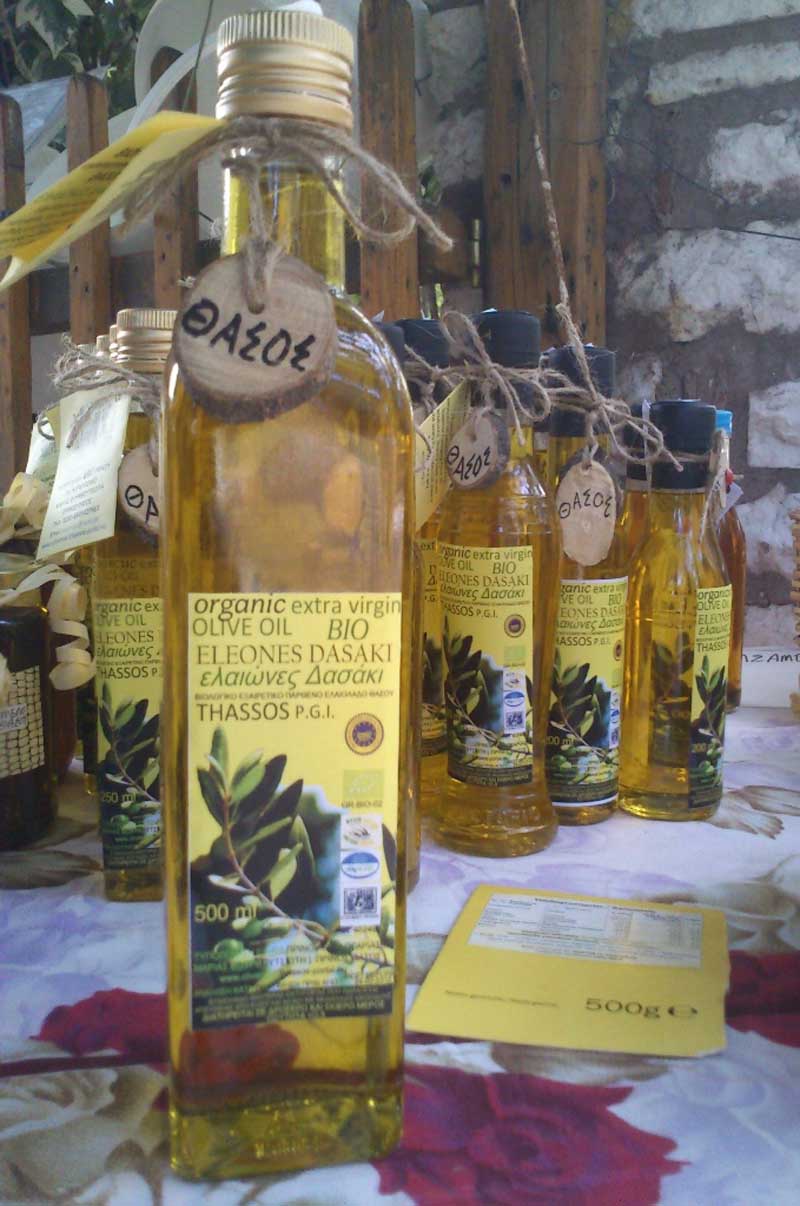 Thassian WINE where the PGI Thassos wines are produced.

The golden era of Thassian wine was mainly during the Hellenistic and Classical times, when it played a major role in the development of the island's economy. After wine-producing was replaced by olive-growing as the island's main industry, the production of wine steadily declined.

Today there is no mass production and there are only a few limited types of Thassian wine for sale. You may try, however, exceptional quality wine from private growers and producers around the island. 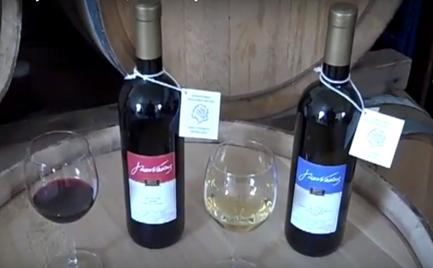 According to the information we have there were vineyards in Halkidiki (at Mendi, Skione, Akanthos and the Mt. Athos peninsula), on Thassos, at Pella and Stagira, where Aristotle himself kept a vineyard. An inscription has also been found on Thasos dating from the 5th century BC, which regulates all aspects of the grape harvest, wine production and the sale of wine, which could only be sold in amphorae officially sealed by the market inspectors. The same law, intended to protect the authenticity of the local wine, determined that no ship bearing wine could approach the port of Thasos, on pain of seizure of the vessel. 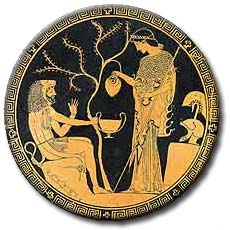 The wines of Macedonia and, mainly, of Thasos, were exported to the whole of the known world, in amphorae carried on cargo vessels. But with the Roman domination of the Mediterranean the centre of gravity of the wine trade shifted from the northern to the southern Aegean, and away from Greece altogether. However wine production in Macedonia carried on uninterruptedly.
Source: http://www.wineroads.gr

From the aforementioned seals we learn that Thassian wine was exported up to Azof  sea, on top of the black sea, to Persia, Sicily, north of the Dalmatian coast. In Athens, a city which was then at its peak, the Thassian wine was in high esteem.

Valued for its aroma in Wealth by Aristophanes, to the women in Ekklisiazouses who knew all the sweets that were hid in the little jars of Thassos, and the companions of Lysistrati who swore on little amphorae with Thassian wine to not letting a man to approach them as long as there is war with Sparta. Thassian wine is served at the banquet of the rich Callias in honor of the beautiful Autolycus and Socrates. Then, Antisthenes uses it as a symbol of luxury.By Theophrastus we learn, that the wine offered to Rector of Thassos was flavored with honey and flour from wild wheat. The color was usually black. It was drank with an equal amount of water and many times offered and warm. Archeostratos names Thassos wine “brave”.

In Greece, begins to indicate new wine regions with exceptional wines. Nevertheless, Thassian wine keeps its place among the first.Then the Romans got fascinated by Greek wines and started transporting wine varieties in Italy.

Virgil, states Thassian wine between these varieties. Pliny, tells us that most varieties that were  transplanted to Italy, came from Chios and Thassos, leading us to the conclusion that Thassos had a multi-varietal vineyard.

Polydeuces and Athenian characterize Thassian wine sweet, with aromas of plants; a  reference to sweet and dry wines.

In Byzantine times, Thassos beset by raiding of Arabs, Slavs, Venetians, Crusaders and pirates. It's a time of stagnation rather than growth. At the end of the Byzantine era Thassos belongs to the Genoatiko house of Gatelefkon.

After the fall of Constantinople, many Constantinople families settled in Thassos which is shown by the many Byzantine name of the inhabitants of. Until 1455, when it was conquered for the first time by the Turks and stays firmly against the Turkish occupation from 1459 until 1813, except for the period 1770-1774 that was to the Russian occupation.    source: https://giannakis-winery.blogspot.com/2012/09/wine-history-in-thassos.html

About tsipouro. Tsipouro is a genuine Greek product. It is not produced in any other part of the world except Greece.Thre are 2 shorts aminly. The traditional at northern Greece which is distilled with anis and more herbs for a unique aroma and the tripouro without anis, mainly in cntral and souther Greece.
At Thassos is produced with a lot of anis and herbs and it is extremely aromatic with aitherian oils.
Tsipouro is a strong distilled spirit containing approximately 40-45% alcohol per volume and is produced from the must (the rest of the grapes after making wne)  of the winepress. The distillation process is made twice for a good tsipouro lasts for about three hours, during which the product is tasted for its alcohol content, in a stable temperature, not over 95 C. Finally, the distillation stops just when the distilled Tsipouro has the desired percentage of alcocol.
The name Tsipouro is used throughout the country, except for Crete, where the same spirit with a stronger flavor is known as "Tsikoudia". In some areas of Greece, the Oriental name "Raki" is also used.

is an un-aged brandy from Greece and in particular Thessaly, Epirus, Macedonia, and the island of Crete (where Cretans call it tsikoudia). Tsipouro is a strong distilled spirit containing 40–45% alcohol by volume and is produced from either the pomace (the residue of the wine press) or from the wine after the grapes and juice have been separated. It comes in two types, pure and anise-flavoured, and is usually not aged in barrels, although barrel aged versions do exist.

There is local tsipouro all around the island served mainly in Taverns. Quality and taste is subject to your taste. Usually the local tsipouro is double distilled with anis and herbs and it aromatic and strong.

There is also distilled tsipouro from Thassos Isalos 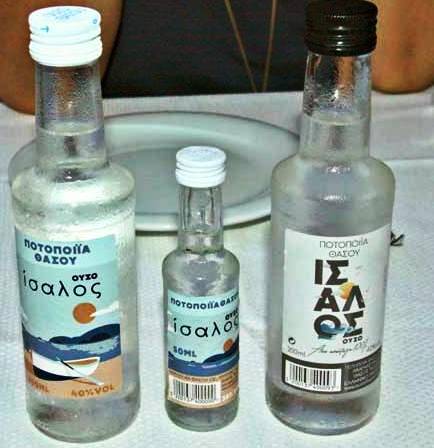 Local Restaurants. There are tavernas located along the waterfront in Skala Prinou,  in Prinos and wonderful traditional tavernas at the mountain stone made
village Kazaviti. Personal choice

Bars. You can also walk into Skala Prinou and enjoy a drink at one of the bars and cafes. Also in Prinos are cafes and kafeneio.

Night life after 12:00 is at Potos, Limenaria, Limenas

Market Prinos Market is every Monday in the morning. There are clothing stalls, fantastic fruit and vegetables stores. You will also find local produce such as the locally made honey and olive oil, olives, sweets, herbs etc. 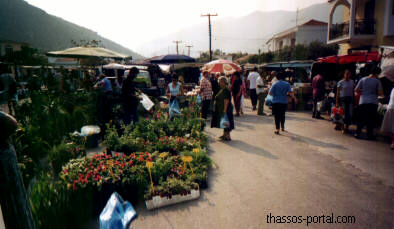 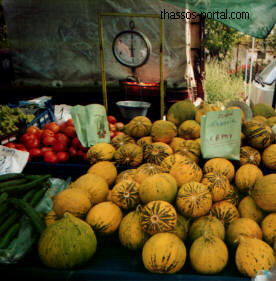 Places of interest: Prinos village is worth visiting especially to see the market. Skala Prinou has daily ferries to Kavala which is a beautiful city with a pretty seafront, a castle and lots of tavernas and shops.

Kazaviti and small Kazaviti, old villiages with stone houses, beatiful nature and nice taverns with local food.
There is also an olive oil Museum, olive oil production and fabrication, honey association with direct sales where you can buy 100% local products and tsipouro distilleries.

And the olive groves of Prinos which is one of the largest and oldest.

Amenities. There are pharmacies in Prinos village and on the main road between Skala Rahoni and Skala Prinou. There are small supermarkets and some more shops in the centre of Skala Prinou.

Nearest Banks and Cash Point. There is an ATM (Emporiki Bank) down at the Port, Skala Prinos. The nearest bank is in Thassos Town.

Local Transport: The bus stop is close to the Port and links Skala Prinou with Thassos Town, Prinos and the south of the island. Cars rentals and bicycles are in Skala Prinos. (Potos, Hertz, Avis, Europcar).

Almost every village and every church has its own festivities. I just indicate some of them here. I am sure if you ask the local people you can add some more at the list. Every festivity - panigiri - is mainly a local event where the kloubani - a local food offered to all visitors - served as well people dance with live music.

Walks: There are some good walks in the area, between the olive groves or at the mountains, starting from Prinos or Kazaviti. A nice walk is from Skala Prinos to Prinos, parallel to main road, which leads to Prinos through the olive trees and is recommended for a visit to Prinos especially on Monday for the Bazar. Walks around the island are organised from agencies. Most popular is on the highest mountain Ypsario starting from Panagia.

Recommended walks: Thassos is one of the most beautiful islands of Greece, combining sea and mountains with pine forest and olive groves. The ideal combination of blue like its clear water and green like its forest. The excellent beaches with crystal clear water, the remote tiny bays, the picturesque villages and the busy night life make Thassos an ideal and popular resort. Thassos is ideal for a family or even for singles who likes activities like swimming, fishing, water sports, nature trecking, yachting, scuba diving.

* The island has no airport, but is served by the International Airport of Kavala. From this Airport there are flights to and from Athens (50 min) daily. There also are flights and charters to and from important European cities, several times a week. The airport is 13 km from Keramoti, where the ferryboats assure the connection with the capital of the island (35 min).

* Transport on the Island Daily buses via Panagia and Prinos serve all the coastal villages. The 100 kilometer long road network is in good condition. Cars and motor bikes are available for hire on the island.

FaLang translation system by Faboba
Back to top
template-joomspirit.com